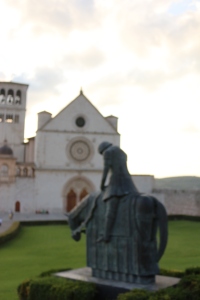 Fourteen months ago I arrived here at the Basilica of San Francesco in Assisi, Italy at sunset. To say I fell in love with it upon sight is a bit of an understatement. I stood looking at it, marveling at the cloud patterns and the pink sky, and was thoroughly enchanted by it all. The remains of St. Francis and four of his most devoted companions are entombed here within the walls. The statue of Francis on his horse, returning from battle in the upper courtyard, beckoned me to pay attention. He looked dejected, having given up the notion of becoming a grand knight because God had planted the idea that he should return to his city and wait for further instruction as to what he should do.

Francis is one of the most popular saints in the world. When I set out for my pilgrimage, the number of people who asked for prayer in Assisi to St. Francis outnumbered all else I was asked. St. Francis believed that every circumstance held an opportunity to find the beauty of God’s love. Even though he was not Ignatian, he did find God in all things. His story is quite amazing. Born in 1182 into a wealthy family of a cloth dealer, he was a spoiled party goer. He became ill after being captured during a war and imprisoned for a year before being released. Once restored to health, he desired to be a knight but slowly he had a conversion and was alienated by his friends. He eventually renounced his father’s wealth, stripped naked and returned his clothes to his father in public. He undertook rebuilding a chapel because he heard the Lord tell him to repair his house. Slowly companions joined him and the group grew into an order that would be known as the Franciscans. Stories and legends abound about Francis, some quite spectacular. His spiritual friendship with Clare also merits recognition. Many know of his attachment to all of creation and some of the mystical encounters with animals. A leper changed his life. Francis who had always had an abhorrence to lepers was drawn to embrace one.

One of the appeals of Francis for me is that he had a deep conversion that turned his life around. He wholeheartedly walked away from a life of luxury and embraced the mission that God placed before him. His prayerful commitment led him around the world and yet to the people of his very own village. He allowed God to use him completely, including through the stigmata. In Ignatian terms, he returned to God all that had been given to him. He knew the Take Lord and Receive commitment completely.

I strongly encourage people to read about this saint as he has the potential to bring blessings to your life. As we watch Pope Francis move in the world, we get a glimpse of St. Francis. His focus on caring for the environment, his willingness to embrace poverty and the least of these, his spiritual friendships, his conversion, and his great devotion to God are inspiring. When I went to Assisi, I felt a sacred mysticism radiating from the buildings and the cobblestone roads. I truly felt like Francis, Clare and the great cloud of witness that had walked those paths had spread holiness in this village that remains today.

What saint has impacted you and why?
Francis renounced everything to follow Christ’s call in his life. How do you understand this call in your own life?

God, you gave St. Francis a heart of service,
a spirit of courage and prayerfulness,
and a mind set on pleasing you.
Bless us too, Creator, with these gifts
so that we may love you, one another
and all creation with such zeal and joy.

A Canadian prairie girl rooted in Ignatian spirituality, I seek God in all things. Whether I catch a glimpse of the Divine and delight in its presence in nature or in the beauty of an encounter with someone, I am ever so grateful that I can recognize the Creator. I greet each new day with hope and happiness, expecting blessings and miracles because I am created to praise, love and serve God. This blog is one way of realizing that through my writings, prayers, and photography. To God be the Glory!
View all posts by sstyves →
This entry was posted in #prayer, #Saints, #Travel, Catholic, Christian, Faith, Ignatian, Spirituality and tagged #Assisi, #beauty, #Blessed, #Saints. Bookmark the permalink.