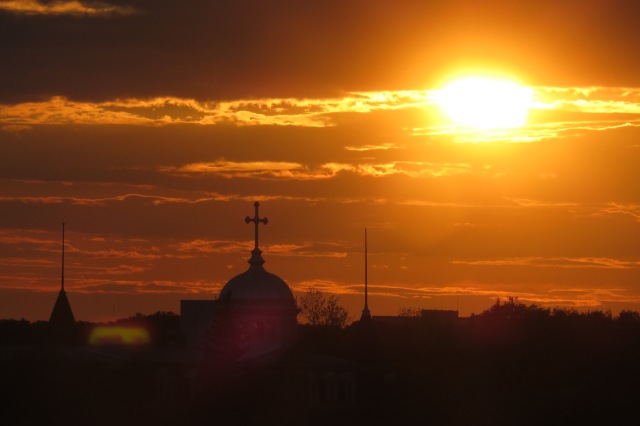 We are truly blessed in life if we find a someone who loves us despite our flaws.  Today is the anniversary of the death of my friend Ginny.  She was a complex woman.  I think we were similar in that way.  She was a woman of faith and of fury.  She was generous, creative, loving, and wise.  She was in many ways larger than life.  Twenty-four years later, I still miss her quick smile and that flash of anger in her eyes, both of which spoke of the passion that dwelt within her.  The lessons I learned from her remain precious.

Ginny was easy to love and the two of us could talk about almost any topic or nothing at all and that would be fine.  One morning on a retreat, lazily sitting on the couch by the window, I suggested I should use my time properly and get to the questions I was supposed to reflect on.  She responded that she was just going to sit there and watch my wet, curly hair dry in the sunlight.  She was an artist at her core, often seeing what most of us missed.

Ginny said many valuable words to me over our intense year together but the ones that have stayed with me are ones she wrote as I prepared to return to my country after my year of service with a social justice organization.  She told me that I had an innate ability to see the good in people, even when seeing the opposite would be easier.  She was really the first person to point out this character trait of mine.  That year had had its struggles for both of us, but she was telling me in some ways that not only had I survived, I had let the others thrive because I did not give up on them.  I sought out the Divine good in people.  I, for my part, had never noticed this beautiful gift that had been given to me.

Another friend used very similar words recently after the sudden death of her husband.  Randy and I on the surface seemed to be anything but two peas in a pod, but gosh, that man could make me laugh.  His wife, my colleague who became a dear friend, and I spoke a few days after his passing.  She mentioned that day that she did not understand why I even liked him, but she too knew that I saw the good in people–and Randy had a lot of good in him.  This complex nature of mine enjoyed the Newfoundlander and his quirks immensely.  I loved arguing with him, teasing him, being teased by him, being put in my place, and talking in code with he-who-would-not-be-photographed.  We were both wildly intense and I appreciated his no-nonsense, tell-it-like-it-is way of carrying on a conversation.  Some days I could hardly get a word in edgewise with that introvert who loved to talk when he found the right ear to speak into.  I am sure if people saw us they would wonder why the church lady was hanging out with the headbanger, but looks are so deceiving.  One night at a retirement party,  he had me laughing so much that my jaw hurt the next day.  I used to make Ginny laugh like that and she would get so fake angry with me because there is such a freedom or lack of control that goes along with that intensity.

To recognize the Divine in someone is a gift.  Ginny and Randy both saw me for who I was and I them.  From the outside looking in, my friendship with Ginny would have made sense to people, while those who judge with narrowness would have been puzzled a bit by Randy.  The truth is Randy was a rare gem, someone who lived fully and did not hold back much about anything.  Anyone who really knew him would attest to this. So much goodness abided in him. Searching for the Divine in the other solidifies relationships in fascinating ways.  We are never the same when we catch that glimpse of God in human form that lives within each one of us.

If we stopped for a moment and marveled at God-in-Front-of-Us, our relationships would be different.  Gruff exteriors, quietness, loudness, attractiveness, and the such are just distractions from discovering what people are like deep down. To be able to find someone’s innate goodness, we have to sweep aside the external noise.  We all are guilty of overlooking the people who most need to know that they are lovable. God sees the heart; so must we.  Do not get caught up in the negative parts of a person; none of us can throw stones. Instead focus your energies on seeing the good.  That treasure may need to be polished before it can shine brightly but I think that is our calling.  We all have had enough mean-spirited messages about who we are brought to our attention throughout our lives.  Let us instead nourish the goodness that each of us has within us. I am ever grateful to Ginny for drawing out this gift of mine and to Randy for letting me in to his world.

What do you seek first when you meet a person–a negative or positive quality?

What person in your life is a polar opposite from you that you still love to be with?

Maker of All Things Good, help us to seek the Divine and recognize it in those around us. May our eyes be open to the good in each one we meet.  May we know our own goodness.  May we call forth the good in ourselves and those around us daily.  Amen.

A Canadian prairie girl rooted in Ignatian spirituality, I seek God in all things. Whether I catch a glimpse of the Divine and delight in its presence in nature or in the beauty of an encounter with someone, I am ever so grateful that I can recognize the Creator. I greet each new day with hope and happiness, expecting blessings and miracles because I am created to praise, love and serve God. This blog is one way of realizing that through my writings, prayers, and photography. To God be the Glory!
View all posts by sstyves →
This entry was posted in Catholic, Christian, Faith, Ignatian, Spirituality and tagged #beauty, #cancer, #ComplexPeople, #Distractions, #Feelings, #Freedom, #Friendship, #Gratitude, #Innategoodness, #Joy, #LooksAreDeceiving, #lovewins, #Memories, #Peace, #Prayer, #Relationships, #Remembering, #SeekGood, #SeekingGod, #WeareLoved. Bookmark the permalink.

2 Responses to Recognizing the Divine